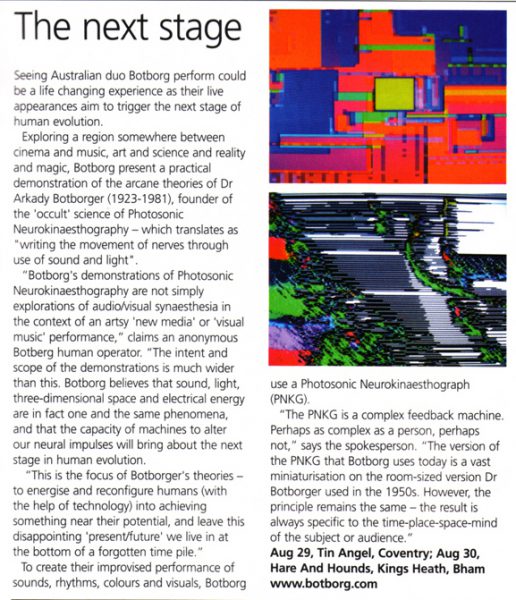 From: https://www.theprogram.net.au/featuresSub.asp?id=3273&state=1 J ARTS CREW :: Botborg – NeuroArt For The Not Faint At Heart Continuing the research of a Soviet scientist, Brisbane’s Botborg make art like brain surgery. “Once we were living in a house where there was an organ in the lounge-room and a key got jammed and there would just be this constant sound day and night. After a while you’d just forget about it until someone would finally hit a different key. A few days…

From: https://www.foxydigitalis.com/foxyd/review_detail.php?id=1409 Artist: Botborg Album: Principles of Photosonicneurokinaesthography Photosonicneurokineasthography is an occult science developed in the mid-60s by a Dr Arkady Botborger (1923-1981). Due to the importable equipment involved, it wasn’t possible to demonstrate this process of “writing the movement of nerves through use of sound and light” in public… UNTIL NOW. That’s what Botburg claim, and I can’t say I believe them. But this…

“New horizons for audio-visuality” review of Trans-Acoustic from RealTime

From: https://www.realtimearts.net/rt71/stern_transacoustic.html New horizons for audio-visuality Joel Stern writes from and performs at Transacoustic, New Zealand Auckland’s Trans-Acoustic festival describes itself as an experimental platform for the fusing of sensory impressions. A brainchild of Zoe Drayton, founder of Audio Foundation, a resource hub for experimental audio culture in NZ, Trans-Acoustic featured 3 nights of performance by Australian and New Zealand artists who…